Students should express H0 and H1 as an equation or inequality, or in words as appropriate.

In examinations:
• the maximum number of rows or columns in a contingency table will be 4
• the degrees of freedom will always be greater than one. At SL the degrees of freedom for the goodness of fit test will always be n…1
• the χ2 critical value will be given if appropriate
• students will be expected to use technology to find a p -value and the χ2 statistic
• only questions on upper tail tests with commonly-used significance levels (1%, 5%, 10%) will be set
• students will be expected to either compare a p -value to the given significance level or compare the χ2 statistic to a given critical value
• expected frequencies will be greater than 5.
Hand calculations of the expected values or the χ2statistic may enhance understanding.
If using χ2 tests in the IA, students should be aware of the limitations of the test for expected frequencies of 5 or less.

The t -test.
Use of the p -value to compare the means of two populations.
Using one-tailed and two-tailed tests.

In examinations calculations will be made using technology.
At SL, samples will be unpaired, and population variance will always be unknown.
Students will be asked to interpret the results of a test.
Students should know that the underlying distribution of the variables must be normal for the t -test to be applied. In examinations, students should assume that variance of the two groups is equal and therefore the pooled two-sample t -test should be used.

What is the Chi-square test of independence?

The Chi-square test of independence is a statistical hypothesis test used to determine whether two categorical or nominal variables are likely to be related or not.

When can I use the test?

You can use the test when you have counts of values for two categorical variables.

Can I use the test if I have frequency counts in a table?

Yes. If you have only a table of values that shows frequency counts, you can use the test.

Using the Chi-square test of independence

The Chi-square test of independence checks whether two variables are likely to be related or not. We have counts for two categorical or nominal variables. We also have an idea that the two variables are not related. The test gives us a way to decide if our idea is plausible or not.

What do we need?

For the Chi-square test of independence, we need two variables. Our idea is that the variables are not related. Here are a couple of examples:

For a valid test, we need:

Let’s take a closer look at the movie snacks example. Suppose we collect data for 600 people at our theater. For each person, we know the type of movie they saw and whether or not they bought snacks.

Let’s start by answering: Is the Chi-square test of independence an appropriate method to evaluate the relationship between movie type and snack purchases?

It appears we have indeed selected a valid method. (We still need to check that more than five values are expected for each combination.)

Here is our data summarized in a contingency table:

Before we go any further, let’s check the assumption of five expected values in each category. The data has more than five counts in each combination of Movie Type and Snacks. But what are the expected counts if movie type and snack purchases are independent?

To find expected counts for each Movie-Snack combination, we first need the row and column totals, which are shown below:

The expected counts for each Movie-Snack combination are based on the row and column totals. We multiply the row total by the column total and then divide by the grand total. This gives us the expected count for each cell in the table. For example, for the Action-Snacks cell, we have:

We rounded the answer to the nearest whole number. If there is not a relationship between movie type and snack purchasing we would expect 65 people to have watched an action film with snacks.

When using  software, these calculated values will be labeled as “expected values,” “expected cell counts” or some similar term.

All of the expected counts for our data are larger than five, so we meet the requirement for applying the independence test.

The basic idea in calculating the test statistic is to compare actual and expected values, given the row and column totals that we have in the data. First, we calculate the difference from actual and expected for each Movie-Snacks combination. Next, we square that difference. Squaring gives the same importance to combinations with fewer actual values than expected and combinations with more actual values than expected. Next, we divide by the expected value for the combination. We add up these values for each Movie-Snacks combination. This gives us our test statistic.

This is much easier to follow using the data from our example. Table 4 below shows the calculations for each Movie-Snacks combination carried out to two decimal places.

Lastly, to get our test statistic, we add the numbers in the final row for each cell:

To make our decision, we compare the test statistic to a value from the Chi-square distribution. This activity involves five steps:

It’s important to note that we cannot conclude that the type of movie causes a snack purchase. The independence test tells us only whether there is a relationship or not; it does not tell us that one variable causes the other.

Let’s use graphs to understand the test and the results. 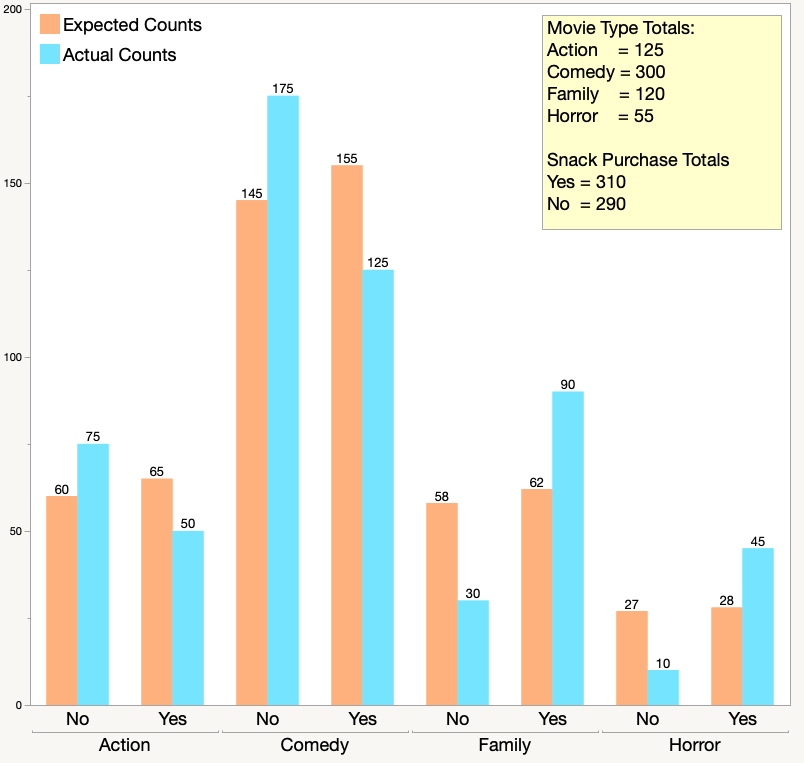 If you look across all four of the movie types and whether or not people bought snacks, you can see that there is a fairly large difference between actual and expected counts for most combinations. The independence test checks to see if the actual data is “close enough” to the expected counts that would occur if the two variables are independent. Even without a statistical test, most people would say that the two variables are not independent. The statistical test provides a common way to make the decision, so that everyone makes the same decision on the data.

The chart below shows another possible set of data. This set has the exact same row and column totals for movie type and snack purchase, but the yes/no splits in the snack purchase data are different. 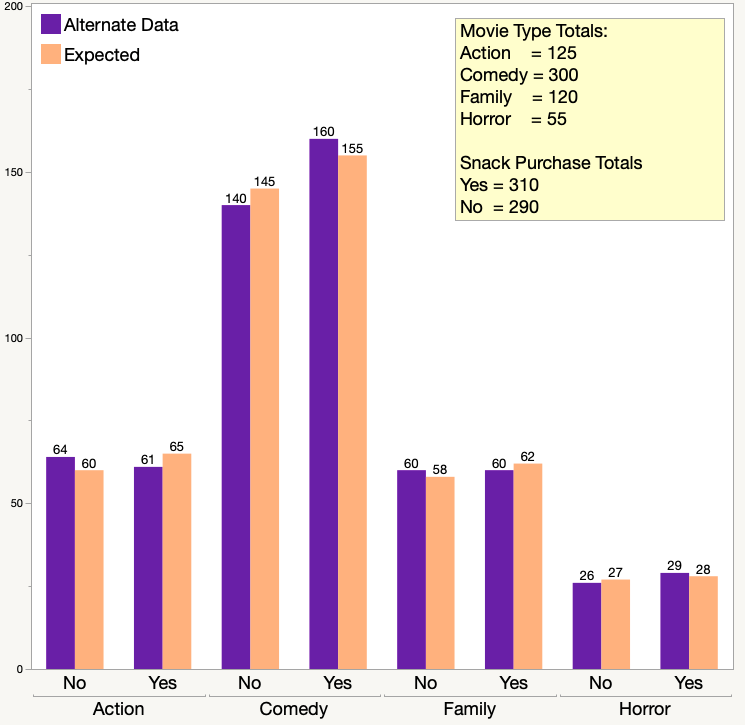 The purple bars show the actual counts in this data. The orange bars show the expected counts, which are the same as in our original data set. The expected counts are the same because the row totals and column totals are the same. Looking at the graph above, most people would think that the type of movie and snack purchases are independent. If you perform the Chi-square test of independence using this new data, the test statistic is 0.903. The Chi-square value is still 7.815 because the degrees of freedom are still three. You would fail to reject the idea of independence because 0.903 < 7.815. The owner of the movie theater can estimate how many snacks to buy regardless of the type of movies being shown.

Let’s look at the movie-snack data and the Chi-square test of independence using statistical terms.

The alternative hypothesis is the opposite.

Before we calculate the test statistic, we find the expected counts. This is written as:

The formula is for an i x j contingency table. That is a table with i rows and j columns. For example, E11 is the expected count for the cell in the first row and first column. The formula shows Ri as the row total for the ith row, and Cj as the column total for the jth row. The overall sample size is N.

We calculate the test statistic using the formula below:

There are two possible results from our comparison: 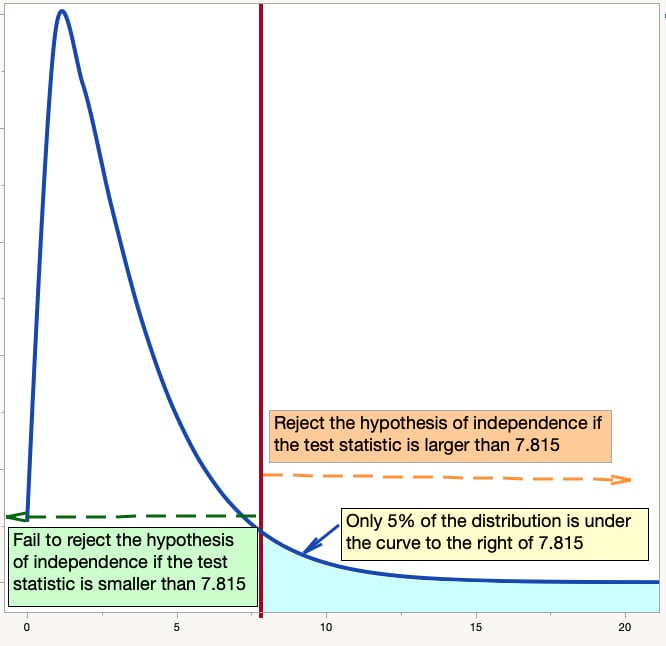 Figure 3: Graph of Chi-square distribution for three degrees of freedom

The next distribution graph shows our results. You can see how far out “in the tail” our test statistic is. In fact, with this scale, it looks like the distribution curve is at zero at the point at which it intersects with our test statistic. It isn’t, but it is very, very close to zero. We conclude that it is very unlikely for this situation to happen by chance. The results that we collected from our movie goers would be extremely unlikely if there were truly no relationship between types of movies and snack purchases. 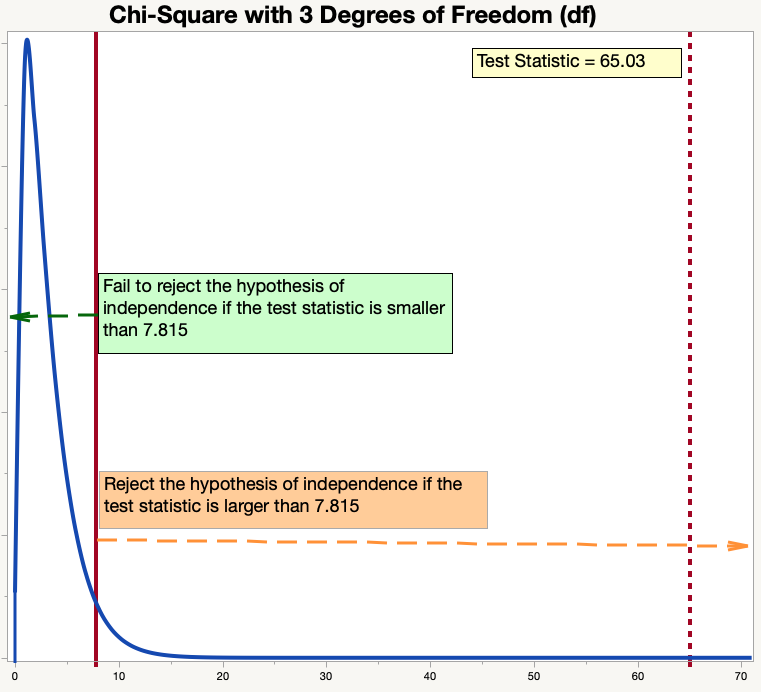